Once you’ve had your fill of Costa Rican wildlife, ziplined, hiked and surfed your heart out, consider what’s increasingly known as ‘indigenous tourism’ – visit the Boruca people and their village as they are among the only remaining native peoples in Costa Rica today.

The reservation is within the province of Puntarenas, the largest province in Costa Rica, close to the boarder with Panama, about a 5 hours drive south of San Jose. Their ancestors originally ruled over the entire Southern Zone in regional chiefdoms, and now you can find them thriving on the Boruca-Terraba Reservation.

The drive itself is an experience to be remembered as it takes you along the spine of the Talamanca mountain range, and the views of the picturesque valley of the Rio Grande de Terraba are absolutely breathtaking. There are several historical references to this Pre-Columbian tribe being called both Boruca and Brunka.

Centuries ago, when the Conquistadors came to capture and enslave them, the Brunka people discovered that their traditional folklore masks helped protect them. The Catholic Spaniards were terrified of unknown demons, and the masks proved an effective defense against the invaders.

Today the masks are a symbol of glory, and they are recreated as decorative art pieces.

So they began carving, painting and wearing even more of those, and as a result managed to intimidate the sword and musket-carrying Spanish. Today the masks are a symbol of glory, and they are recreated as decorative art pieces, provoking treasured memories of this unique cultural heritage.

This victory of the indigenous population over the Spaniards is also celebrated during the raucous annual three day Fiesta de los Diablitos that lasts from December 30 to January 2, sometimes called Danza de los Diablitos – ‘the dance of the little devils’. It is a true spectacle to witness.

During the three days a sort of progressive ‘dance’ is acted out, in which the natives (the diablitos) battle against the Spanish invaders – represented by the ‘toro’, the bull – and the interactions portray the historical struggle between the two sides.

The dance culminates with the Boruca people emerging triumphant from the battle (and burning of the ‘toro’ – minus his mask – in a spectacular bonfire), symbolizing how the native culture has survived until this day, despite colonial rule.

The ‘diablos’ and the bull dress in costumes made from cloth sacks and banana leaves and the elaborately carved and painted wooden masks are painstakingly made by hand. Only men from the village who have made their own masks are permitted to take part in the festival. The masks used during the fiesta are sold afterwards, and, understandably, are especially precious. We watched with terror how a sudden downpour of tropical rain washed away some of the meticulous paintwork!

Like all other Costa Rican celebrations, Fiesta de los Diablitos would not be complete without music, food and drinks. Tamales (corn, rice or beans) are very common and cooked to perfection. Try them alongside Carne Humada, a slowly smoked pork dish. The pork is seasoned with freshly grown local spices and smoked for many hours.

No meal here is complete without a drink of homemade Chicha – a fermented corn drink of which there are as many recipes as households in the village, seemingly. Our first association was the Mexican pulque drink – the two are surprisingly similar despite the latter being made of maguey (agave) plant. Indulging in Chicha, especially on a hot dry afternoon, should be approached with caution…

If you miss out on Boruca’s Fiesta de los Diablitos, don’t despair – a similar celebration is held in the neighboring reserve of Rey Curré  in February, so you’ll have the chance to witness this captivating cultural festival if you’re traveling after Christmas.

There is also a smaller Fiesta de los Negritos, held in the second week of December in honour of the Lady of Immaculate Conception. There is dancing, colorful costumes, and traditional drumming and bamboo flutes.

Today the Boruca are peaceful people who support themselves largely through agriculture and their unique crafts – a visitor to anywhere in Costa Rica will notice Boruca’s beautiful art and crafts in the better souvenir shops throughout the country.

Their surviving population numbers a little over 2,600 members and they speak the ‘Brunka’ language. Fewer than 40 members of the tribe (or as few as 6 according to some accounts) can currently speak the language fluently. Many only understand Brunka when spoken but they rarely use it. Most of them speak a patois, a mix of the ancient Boruca language with other dialects and a dash of Spanish thrown in.

As a means to reach out to the modern world, they have created a website where you can learn more about these fascinating people, as well as formed an association to support themselves in achieving their goals called the “Artesanos Naturales de Boruca”.

Be sure to check out the tiny but informative Museo Comunitario Indigena de Boruca in the heart of the village, created by the association, whose exhibits shine a light on Boruca legends, history, traditions and crafts. There is an elder available to provide a tour of the facilities. Hard to miss is also one of the fascinating stone spheres at the entrance.

Attached to the Museo is a small shop selling handicrafts with hand signatures of local people who made each piece – now that’s a bespoke souvenir. You can also learn more about how they create the natural dyes and weave their unique patterns, and sometimes watch their resident carvers create the captivating masks they are so famous for.

Whether in the museum shop or elsewhere in the village, do look for Brunka arts and crafts before you depart. It is a souvenir that will be a beautiful reminder of this (as of yet) undiscovered part of Costa Rica.

If you are not able to visit the village, but are interested in supporting the work of the local artisans, you can purchase pieces of their unique handicrafts online. One of the most responsible online galleries to check out is San Jose-based Galeria Namu who has been shipping Brunka masks worldwide for over 12 years.

Their name (namu is the Bribri word for jaguar, the sacred animal to so many tribes of Central America) addresses their mission – to respect and celebrate the permanence and legacy of the indigenous people of this land. 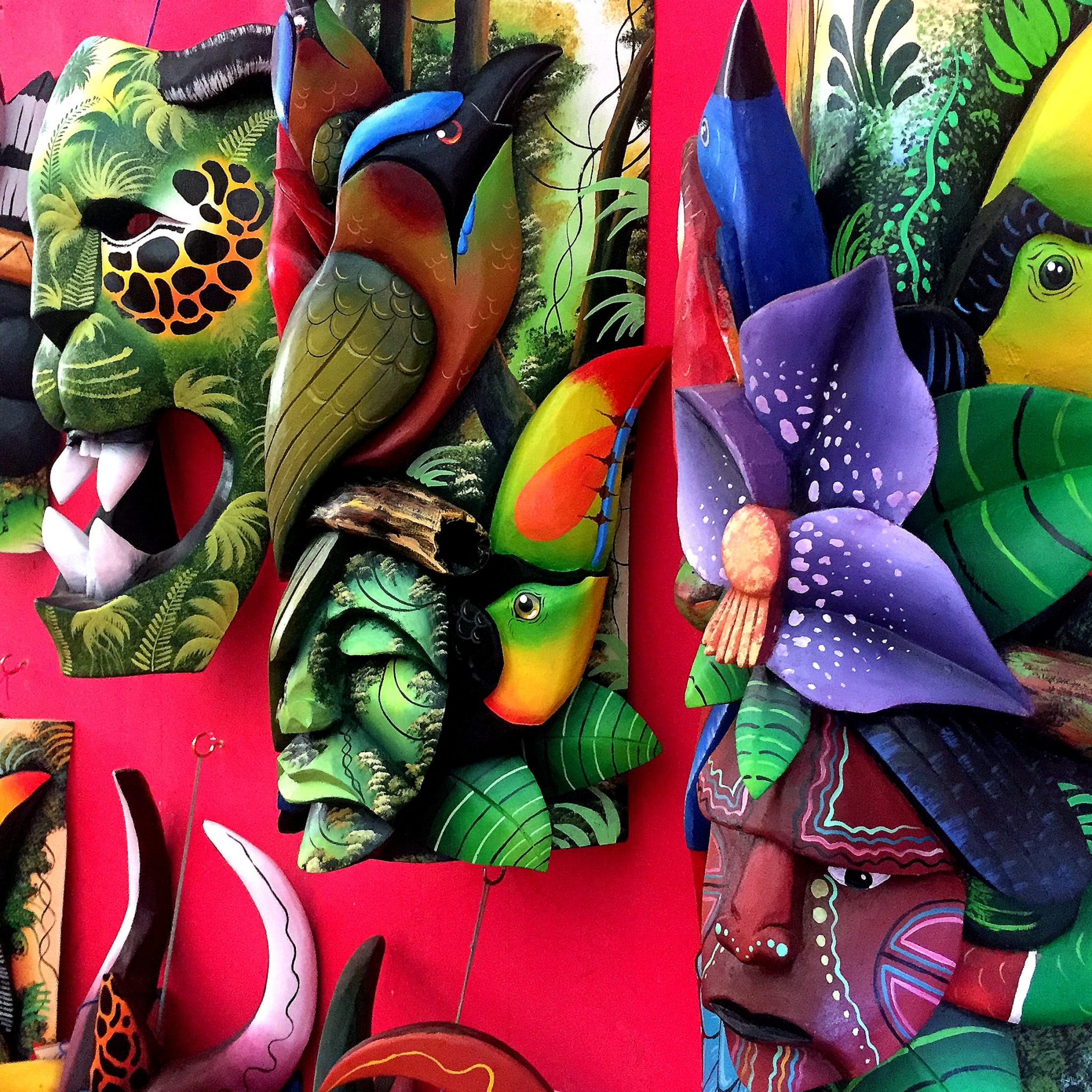 There is no other gallery in the country that has brought together such a collection. Their objective is to give the artists the forum they deserve. They engage in fair trade practices: the artists get paid immediately, rather than on consignment basis, and they are assured of receiving equitable compensation.

There is a rich and diverse body of folk and indigenous art.

Despite the general consensus about Costa Rica as not a country one comes to expect to find an array of arts, Namu proves that this is simply not the case. When one looks hard enough, there is a rich and diverse body of folk and indigenous art which is not hard to imagine, given the stunning natural beauty of this land – how could it not inspire the beautiful art they have assembled.

The staff at Namu are so committed to fair trade and to promoting the incredible works of art from this little corner of the world, that they even offer ‘eco-ethno’ tours, through which they proudly act as a connection for you to enjoy a memorable visit to the village of Boruca in the most responsible way.

‘Eco-ethno’ is a sustainable way to support a community.

This tour immerses you with the Brunka culture, the people and their customs, while doing their best to ensure that ‘eco-ethno’ is not just an empty new buzzword in adventure travel, but a sustainable way to support a community while providing a rewarding and memorable travel experience. (They also organize excursions to the villages of Maleku, Bribri and Ngöbe).

Should you wish to organize the journey yourself, Boruca invites you to come for a visit on a day-trip, or even an overnight home-stay for those who would really like to immerse themselves in this unique and culturally rich community life, while also contributing directly to the local economy. For a small fee, some of the families have opened their homes to include room and meals.

Travelers can find rooms to rent by inquiring locally in Boruca village. Mileni Gonzalez, a local community organizer, can help arrange accommodation such as rustic cabinas or homestays (you can reach him through their website or email us for contact details).

As always, be mindful and respectful when visiting. In particular, refrain from taking photographs of people without establishing contact and asking permission. We were impressed by the fact that during Fiesta de los Diablitos a photography permits were being issued, their price determined by the size of your camera and lens, and the money collected going back to the community.

A 4×4 vehicle is strongly advised (though not absolutely necessary) if you’re planning on venturing out by car. If you don’t have own transport, buses (around $2) leave from the bus stop near the central market in the town of Buenos Aires an hour away at 12pm and 3:30pm daily, and return from Boruca at 6am and 11am in the morning, if you’re planning an overnight stay. A taxi from Buenos Aires to Boruca costs about $35.

Either way, it is recommended to take that trip during dry season as the road can be rather challenging when washed out. For directions on a self driving excursion or further help with planning consult the excellent local resource that is Ballena Tales.

This website uses cookies to improve your experience while you navigate through the website. Out of these cookies, the cookies that are categorized as necessary are stored on your browser as they are essential for the working of basic functionalities of the website. We also use third-party cookies that help us analyze and understand how you use this website. These cookies will be stored in your browser only with your consent. You also have the option to opt-out of these cookies. But opting out of some of these cookies may have an effect on your browsing experience.
Necessary Always Enabled
Necessary cookies are absolutely essential for the website to function properly. This category only includes cookies that ensures basic functionalities and security features of the website. These cookies do not store any personal information.
Non-necessary
Any cookies that may not be particularly necessary for the website to function and is used specifically to collect user personal data via analytics, ads, other embedded contents are termed as non-necessary cookies. It is mandatory to procure user consent prior to running these cookies on your website.
SAVE & ACCEPT